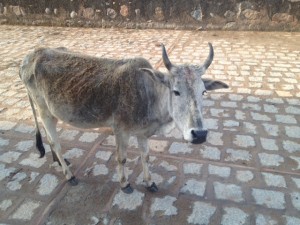 I’m sitting in the Doha Transfer Terminal where I have five hours to fill. It’s the ideal place to pen my second attempt to get my head round India. India is behind me, the UK not yet returned. A sort of neutral space. Limbo.

So did I ? Get ? My Head? Round India ? Over the past week I have discovered two relatively unknown gems and done a lot of travelling in trains, planes, automobiles and tut-tuts (auto rickshaw). So I’ve been getting my body, as well as my head, around.

Orchha, in Madhya Pradesh, had been recommended by a friend of a friend. Imagine a historical site, say the combined size of Hampton Court and Alnwick Castle, discovered in a small town in Staffordshire. Of course, in the UK, such a site would have been developed as a visitor attraction, maybe by the National Trust, and would be a destination for tourists from all over the world. It would be signposted, interpreted, monetarised, have local pubs tweely named after its former royal occupants and a film crew on every crenellated corner.

Orchha is a town of some 8000 souls, a few streets of ramshackle shops and stalls, a market square where people squat beside fires selling dyes and beads and a new, working temple. A couple of nice hotels set up the hill. It is dominated by the enormous ancient tombs, temples and palaces which surround it. It has a beautiful river running through it with a scarily narrow bridge on which pedestrians take their chances alongside cars, lorries and the odd tourist coach going to the nature reserve on the other side. But it is the odd tourist coach. On Tuesday morning, we went into the spectacular fort/ palace which is like the setting for Gormenghast, rising forbiddingly out of the sloping ground. The other western tourists out and about that morning were a Spanish couple whose paths we crossed from time to time. We saw more monkeys than visitors on the top level. The fort is undeveloped and uninterpreted and we declined a guide which we knew would focus on facts and figures – a wander behind its individually designed stone latticework and through its archways and spaces allowed the possibility of an imaginative glimpse of 16th century life there. A few remaining peacock blue tiles on the upper level courtyards let us see what the whole palace would once have looked like, a sort of minds-eye CGI recreation, like the moment when the wreck of the Titanic at the bottom of the ocean morphs into the ship in all its maiden voyage glory complete with Kate Winslet getting out of the car in a large hat. Because, strip away the big tourism and handicam wielding crowds, your head can do that. 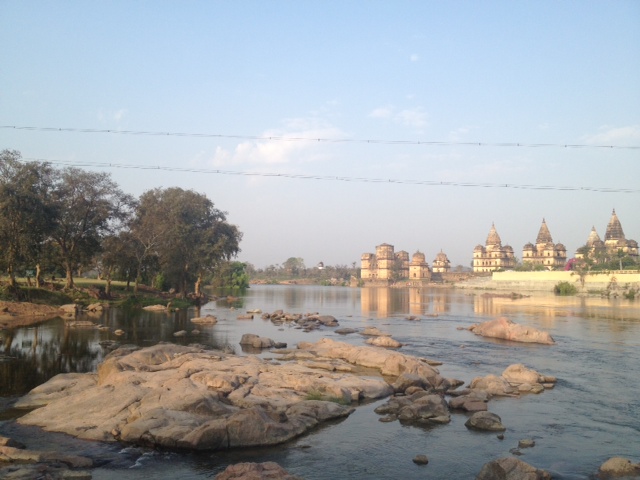 A sunrise walk by the river (even in March its getting too hot to be out later than mid morning unless you are a Mad Dog or an Englishman) saw us walking by the river around the ruins of more tombs and temples where cows and stray dogs were hanging out and a large vulture was practising his wing stretching on the pinnacle of a tower. Young lads were having a pre-school swim and women and men had brought washing to the river, someone had lit a fire on the narrow shore. On the rocks by the bridge, more people were performing their morning oblutions. Folk were friendly, waved and called out ‘hello’ to us but we were un-hassled by the hawkers and would be guides that prevail around the big visitor sites. Apart from one small boy who was desperate to sell us a pack of postcards before he went to school. I obliged.

These are all the upsides of finding an amazing place like Orchha which isn’t on the main tourist trail (yet – the much more famous Khajuraho, three hours drive away, with its big temple sites and spectacular erotic carvings is a world heritage site and Madhya Pradesh is building a tourism offer across a number of other locations). The downsides are the general discomfort and unsightliness which exists alongside the beauty of the river scene at sunrise. For a start, as across much of India, there are piles of rubbish to be found all around the town including in close proximity to the ruined tombs. In one part of the river the invasion of pondweed supports a carpet of plastic bottles which have been thrown into the river. Then there are the roads. Both our taxi ride from Jansi station and to Khajuraho were over rutted, pot-holed roads, in places only driveable on the central section. Which is interesting (the sort of interest that can empty bowels) when a lorry is coming in the opposite direction and neither the trucker nor your driver want to occupy the crumbling camber on their own sides of the road. And that’s without the slalom between cows who nonchalantly stand in the middle of the road giving drivers a look that says ‘you’d better not hit me, I’m sacred’.

The road trip for all its stomach churning and bone shaking was a chance to travel through many rural villages, peer into the darkness of the houses and into dusty back yards as we passed, see kids walking to school with neat uniforms and satchels, men taking a nonchalant crap at the roadside and get a visual on what life is like for millions of poor – but not the poorest if they have a dwelling and a cow – rural Indians. A slice of life I hadn’t seen before which we rattled through and left behind in search of a World Heritage site.

The temples at Khajuraho are spectacular and beautiful, and make you ponder how at one point in the history of the Hindu religion it was not even permitted to represent the body of the deity Shiva (his presence was indicated through the symbol of a footprint) and at another point high religious art is depicting him getting a blow job.

But Orchha got under my skin more. It helped me understand why it was Ok not to go on the tourist pilgrimage to Agra and the Taj Mahal. Apart from the 8 hour round trip and its likely effect on my back, I didn’t want to queue for ages with a load of western tourists whilst resisting the attempts of souvenir sellers to flog me tat, just to tick off one of the Wonders of the World from my list. I know it’s a beautiful building and has impact at the moment you first see it, but so have many other locations in India. In a very crowded historic monument, there is little headspace to resonate imaginatively with the lives and stories of the people who lived there, and it has to be said my experience of Indian interpretation of heritage sites didn’t help in this regard – panels which tell you the dimension, construction, dates, materials and sometimes a bit about the history (if it involves wars or murders). But I found myself thirsting for narrative. Being told that a stone carving represents Shiva appearing to a king in a dream and telling him to build a big tower doesn’t tell me much about the people, except maybe that they had some good recreational drugs.

The aspects of Indian culture I’ve connected with most strongly are the spiritual and contemplative, especially the oases of quiet parks and gardens in the city, the Ghandi museum and the Aurobinda Ashram. Just such a place is my second unknown gem of the week, the Sanscriti museum, about an hour’s drive out of Delhi so definitely off the beaten track. Which is a shame because it’s a wonderful place. Sanscriti literally means ‘the process of cultivating’ and the purpose of the Sanscriti Foundation is ‘to cultivate an environment for the preservation and development of the artistic and cultural expressions of India but of the world as a whole’. Its functions include many of the things I’m passionate about, like supporting emerging artists, encouraging intercultural artistic dialogues and collaborations, strengthening the cultural roots of the next generation – all inspiring stuff. The centre houses three museums, Terracotta Museum, Textile Museum and the Museum of Everyday Indian Art. The last of these was my favourite, things carefully curated together in terms of purpose – toys, smoking paraphernalia, cooking, writing. I especially liked the hair drying irons which apparently also act like a tuning fork and make strange rhythmic sounds whilst the user dries their tresses. And nutcrackers in the shape of ‘amorous’ couples. There’s a lovely quiet garden and studios where artists come for residencies. Like Orchha, in its own way, it’s really unexploited and under marketed which selfishly I like in terms of my own experience, whilst at the same time wanting more people to know about it.

I’ve been reading a book by William Nanda Bissell, the CEO of Fabindia (a wonderful retail store which sells lovely and reasonably priced clothes, household stuff, bags etc with an ethical approach to buying from local artisans and working with communities) called Making India Work. I bought it to try to understand why on one hand the Indian economy is ‘successful’ in global terms whilst on the other hand spectacularly unsuccessful at lifting about 60% of its people out of extreme poverty. Whilst much of Bissell’s analysis is rooted in the specific history and culture of the Indian sub continent (a large part of which is of course down to the legacy British imperialism), I am also surprised at how many of his proposed solutions apply to global economics, especially where the environment and sustainability of growth is concerned. It’s simplistic to say that in India’s problems we see a template for the planet, but I find myself nodding in agreement, from a western perspective, to much of what he says particularly about the wrongness of equating quality of life with consumption.
Sitting here in this global hub of airline travel, I feel that by getting my head a little bit around India, I’ve got it a little bit more round the world.

Next post: Event: The Second Breath. Take to the streets for a mystery tour

Previous post: Getting My Head Round India – Part One