I have always written poetry, had work published in anthologies and magazines and done a few readings. In 2015 I started writing poetry for performance.

DON’T – a poem listing all the ways our language has to warn you not to put yourself out there, was the first poem I performed at an open mic session as my ‘return’ to live poetry. It’s basically about being scared of messing up. 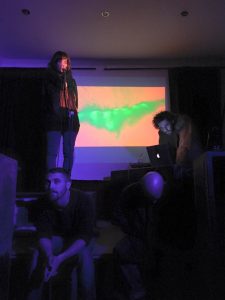 Breath[e]:LESS is a show I made with fellow poets Ralph Dartford and Tom Hunt, music producer/ DJ Kwah and video and lighting designer Al Orange. It is a performance/ gig about our response to climate change and threats to the planet, and the most recent version includes material I wrote in response to the floods in Hebden Bridge in December 2015.

Here is an excerpt :

Drops of uncertainty, deluge of doubt,

it takes cow-arsed courage to be out

in this weather, four days and counting

of storm and rainfall, amounting

to a season’s water in a week.

On the moors above the cruise-ship houses

army yomps through scrub and heather.

In Dermot’s house, they’re on their second bottle.

“The alarmists have invaded

the media, they have mobilised, persuaded

All these groups to tell the same lies.

Stuff that hits the gut.

They want to believe, the more you rebut

The more the believer swears

On his climate bible of doom”

A curtain falls, a night-drop gloom,

Marching to their fury songs.

by rock and root, a rude

what once were paths are streams, fast, violent, spouting,

binding in a thick and liquid plait .

Falling down the shoulder of the hill

Running past the new converted mill.