The Art of Social Dreaming : A Rear Mirror View 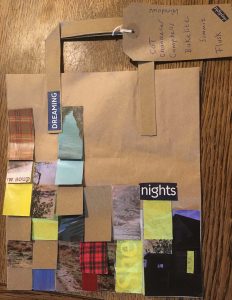 I’m writing this a few days after the third session of The Art of Social Dreaming which took place as part of Slung Low’s Cultural Community College at The Holbeck over three consecutive weeks in February and March.

It’s also the day after the government announced its ‘advice’ to citizens – stopping short of an officially declared lock-down – to minimise social contact in bars, theatres, restaurants, public places, clubs, classes… leading to most public events being cancelled. It is clear that the ‘social’ side of Social Dreaming will need to be re-thought in these dire times. It seems to be retreating in the rear-view mirror of my practice and I haven’t found the next junction yet. Time to reflect. To “Recalculate route” in the words of the trusty Satnav.

Let me first describe, simply, what Social Dreaming is and how we hosted it at The Holbeck.  The main difference between Social Dreaming and other forms of dream work, is that it works with collective dreams, images, memories, associations and their social import, rather than analysing the individual dream in the context of the dreamer’s experience or past conflict.  It allows a collective meaning to emerge from what is shared, and for that meaning to be elicited from the participants. It creates a rich collage of images, associations and detail, an ‘emergent accumulation’ which belongs to the group rather than the individual history or affect. It surfaces the ‘unthought known’ through a process of rhizomic thinking and free association in the bounded space and time of the ‘Matrix’.

In Social Dreaming generally each session is divided into three sections : introduction/ stimulus activity; the Matrix; and the post Matrix discussion. We opened each week’s session with a short introduction to Social Dreaming, explaining its purpose, what it is – and what it is not – and what to expect from the following two and a half hours.  I outlined the context of my arts experiment The Story of WE, and how The Art of Social Dreaming aimed to innovate by exploring Social Dreaming as primarily a creative, rather than research, practice.

As part of this section, we offered each week a creative stimulus, which might generate association, trigger a memory of a dream or resonate through the Matrix. The first week, I showed a short film The Second Breath, an elegiac mix of circus-based movement, electronic music and spoken text. The film has a strong climate change theme, with two contrasting narratives about grief, acceptance and ‘deep hope’ set against anger and denial.  The second and third weeks we shared writing and artwork which had followed in response from the previous weeks.

Participants were then invited to move into the Matrix space which was the upstairs deck of the Slung Low Community College bus. There are no fixed seats, the space was warm and dimly lit to create an atmosphere of reverie and dissociation from the current conscious world.  The first week we reclined on beanbags on the floor, the second and third weeks, we configured the space in the ‘snowflake’ seating pattern with chairs arranged so that no participant is directly facing another. Opening with the invitation “What is the first dream?”, participants spent an hour sharing dreams, or the associations from memory, experience, images that flow from the contributions of others. Most people closed their eyes, spoke softly and slowly. There were periods of silence, sometimes quite long ones. Dreams and associations need to float to the surface in their own time, and silent time can be rich in inner awareness which moves outwards and finds form.

After an hour or so, the Matrix closed and the participants came back into the here and now.  After a short break the group reconvened into the post matrix session, in which we identified the themes, images, ideas and emotions that had surfaced most prominently during the Matrix.  The first week, we (myself and co-facilitator Becky Cherriman) mapped the Matrix dreams and images onto a chart, so that the group had a reference, but in the subsequent two sessions we decided to allow the collective and individual awarenesses of group members to do the ‘selection’. So images which may have seemed very potent in the moment of the Matrix may not have been picked up post-matrix if they did not connect to subsequent associations or related themes.  What was created in the post matrix sessions in weeks two and three was a ‘mind-map’ which reminded me of the kind of creative mapping that artists do at the start of a studio R&D process, as a piece of work starts to form.

Week one’s emergent themes included : Transport, driving and flying, questions of control and safety. Who’s steering?  Colours: vivid red and blue, muted brown leaves and mud, moss and walls.  Liminal spaces between waking and dreaming, inside and outside. Picnics. Wonder and danger combined in a single image. Embodiment: lightness and ease, heaviness, dreamers being unable to run or move. Taste. Mountains and hills.

Four people, including myself, created art works from the ideas and images from week one: two poems and two visual pieces.  These were used as stimulus for the introductory session in Week 2, along with images we invited participants to bring which resonated for them with what’s happening now. One such image was a magnified COVID 19 virus, like a ball sprouting flowers.

For the second week, I invited Wendy Hollway, a friend and XR comrade and a Professor of Psychology, to host the Matrix and co-facilitate the session. Wendy has practised and written about Social Dreaming especially in an arts context, so I was fascinated to get her response to my ‘take’ on Social Dreaming, which she agreed is a departure in seeking to create a cyclical process of dream sharing and creative stimulus.

The Matrix in week two gave us a central image of hands: the denial of shaking, touching or clapping, washing hands. Fear was a dominant affect, stories of other people’s fear (not necessarily participants’) of the natural world, of allergies, of the virus, of personal safety.  Children and sleep were prominent, the ‘Sinister/ Dexter’ of two children, Greta Thunberg and Naomi Sebt as the opposite sides of the Climate crisis. Red and blue were vibrant colours again and roundness: globes, balls, balloons, donut shapes, pom poms. Isolation emerged as the Matrix deepened.

In the third and final week, we had none of the week two participants but about half the group had been there for week one.  We opened with two poems written from previous weeks. In the post-matrix, we created a mind map from the Matrix which had at its centre a ‘shining sphere’ of completeness and wholeness, which connected with mathematical dreams about perfect numbers. Buildings were a strong associative motif – houses, homes, hotels, tower blocks – and the discovery of previously unknown spaces or rooms, as well as fear of heights and lifts. Water was important – a high ‘sacred’ waterfall, the sea, downstream, boats and ships, islands.  Dr Who gave us a whole section on memories, associations with childhood and the delicious fear of hiding behind cushions (‘safe’ comfortable fear). Plants, trees, matriarchs, tribes, identity and ego. Green was the more dominant colour.

Transport seems to be a motif that has run through all three weeks : from the self-driving car and the out of control juggernaut of week one, to the hot air balloon losing height in week two and the bicycles and motorbike of week three. All forms of transport were in some way dysfunctional or anxiety inducing. Maybe because we were on a bus, a connection with the perfect number of 1.11- 111 was a bus number (as well as the NHS non-emergency advice line) – and the group identified an interesting theme around the bus we were on representing consensus, a collaborative space.  We were going on a journey, but a collective journey rather than the lone transport forms of a bicycle, a motorbike, or the private spaces of a car, juggernaut or hot air balloon.

So – where next?  With the COVID 19 situation unfolding on a daily basis, individuals self-isolating and social spaces shutting their doors (The Holbeck has just announced its closure) it is unlikely there’ll be a chance to host more sessions in real space in the near future. This poses a challenge for moving on to the next phase of The Story of WE – from solo creation of work drawn from many voices to co-creation by communities or groups. I and other participants have found deep content in the associative richness of the three sessions to inspire individual work, but how do we start to make something together when we can’t be in the same room?

Can the restrictions nourish some new thinking? Will the insistent shoots of creative practice force through the soil of realities in these times?  The default option : ‘do it online’ is the quick answer, and that may be a way to evolve the Art of Social Dreaming community which had just started to form from these first, tentative sessions.

But first I need to think more deeply about the essence of the work, the origins of social dreaming and how the original practice of Charlotte Beradt found a way through the restrictions, thought-control and dangers of the Third Reich.  I need to think about what is lost and gained from not having people together in a room and whether the art we might make from this has resonance and meaning beyond the participant group.  Questions which artists everywhere are asking themselves about the future of their practice, its collaborative base, its distribution and its connection with audiences. But what will take longer to emerge is an understanding for what these new realities means for the work itself : what is the art we must make? What cultural need may it meet? What stories must be told? What is the new aesthetic of lock-down? And how does art, whether of the one voice or the many, evolve to find its truth in de-activated, de-socialised, quarantined cultural spaces and communities?

None of us individually has the answers. But collectively, we may find clues to them in our dreams.